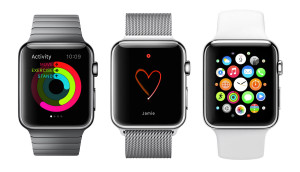 If you don’t already know, the next ‘big’ apple product is the Apple Watch. Yes, a watch. Do you remember them? They were those handy devices which attached to your wrist enabling you to check the time (it may have even beeped on the hour). They started to disappear when everyone started using smartphones like the Apple iPhone. So the company who made the world’s most recognisable smartphone, which abruptly halted the sales of watches, now want to sell a watch. This is an intriguing paradox so why has Apple shifted its focus to wearables rather than augmenting and improving, let’s say, the iPad? Do we really want to buy an expensive watch and what can it do that my old £30 watch can’t? As someone who is neither pro nor anti Apple I decided to have a look at this new direction for the company post Steve Jobs.

You will need to have an iPhone 5, or later, to utilise all of the Apple Watch functions. This surprised me. Apple are cutting out a huge chunk of the market. If you’re an Android user then the Apple Watch is not for you. Then again, perhaps you’ll switch to an iPhone so you can use one.  A risky move for Apple but I suspect that they will be relying on their loyal, and huge, fan base to purchase them in droves.

You will need to charge the Apple Watch every day. Some reports even suggest that it’ll need more frequent charging depending on the amount of usage it gets. This strikes me as utterly bizarre. The joy of a traditional watch was that it didn’t need a battery change for months, if not years. A watch that needs recharging at least once a day will surely be a very unattractive sales point for many?

There will be 42mm and 38mm editions available. Once upon a time the smaller traditional watch would have been strictly ‘ladies only’. Apple have smartly marketed each size as a reflection of your wrist size and not your gender. So for someone like me who has embarrassingly small wrists, the 38mm version would be ideal.

The Apple Watch can be set to work on your right or left wrist. This sounds very basic but most people traditionally wore their watch on their non-writing wrist. For left handers (and the odd few, like me, who wore a watch on their right wrist despite being right-handed) this is a boon. The buttons will now be in a more ergonomically pleasing position.

There will be the usual batch of familiar apps built-in. Siri, incoming call display, photos etc are all familiar to the well seasoned Apple user so these will be of reassuring inclusion. However, I still wonder how many people use Siri. I’ve never found him/her that useful and I often find myself tearing out my hair if I ask what would otherwise be a simple search when using Google. As for photos, will a tiny watch screen be good enough to view/enjoy/share photos?

It tells you the time. From the mouth of Apple “…in addition to showing you the time, Apple Watch actually understands what time means to you.” I have no idea what this means but it certainly sounds enticing (or just as frustrating as Siri).

The watch will have some unique features such as Apple Pay and some interesting health and fitness apps. Unfortunately Apple Pay is currently not available in the UK. If it were this may be a good selling point as contactless payments are increasing sharply (by 174% in the last quarter of 2014) as consumers get use to purchasing products without cash or a PIN.

I have no doubt that the Apple Watch will sell in huge numbers. We’ll certainly be reading news articles claiming that the Apple Watch is outselling Google’s equivalent product. We’ll see TV images of Apple aficionados frantically racing into Apple stores at midnight on 24 April just say that they have the first Apple Watch. That’s all fine but after the excitement I can’t see the Apple Watch being anywhere as successful as the innovative iPad or iPod. Those devices were game changers. They each had new functionality and gave us access to the internet and apps in ways which we had never previously seen. The Apple Watch is merely reinventing the watch and allowing us to access what is already on our iPhones (assuming it is an iPhone 5 or later of course).

This new direction reminds me of the sports company Nike in the UK in the early 1980s. Nike initially focused on sportswear but soon discovered that they could (and still do) make huge revenue from fashionable sportswear rather than just producing high quality sportswear. Apple, I suspect, are following suit and this is their first venture into fashion rather than relying on the sleek design and user interface of their previous products. Get ready to see sports stars and celebrities advertising the Apple Watch in the same way that perfume and expensive cars are currently sold on TV – glossy ads reaching out to those with (masses of) disposable income. A clever move Apple and I’m sure one which will pay dividends.

This article was written before the Apple Watch is available to purchase. I’ll be keeping a close eye on sales and the reaction to this new product. If you’ve got any comments about the watch, both before and after release, please do share them below.