If you use a Windows device then you’re probably aware of the Windows Store even if you’ve never used it. It’s full of apps that you can download onto your Windows device in the same way as you can on your phone or tablet. However, among the few helpful tools available it is full of apps that seem appealing or even parade as official apps but can sting you for some cash when you don’t need them.

Remote Learning during the pandemic has meant that huge numbers of students and their parents are having to use technology in ways that they previously did not imagine. Take Google Classroom, this Bloomberg article from April 2020 states that the number of users at that time doubled to 100 million. While Google doesn’t publish user figures, it’s safe to say that at the time of writing, 10 months later, the number of users has probably increased exponentially since then.  Therein lies a perfect reason for scammers to set up shop.

If I search Google Classroom in the Windows store, here are the first three offerings listed. Question – which one is the official app? 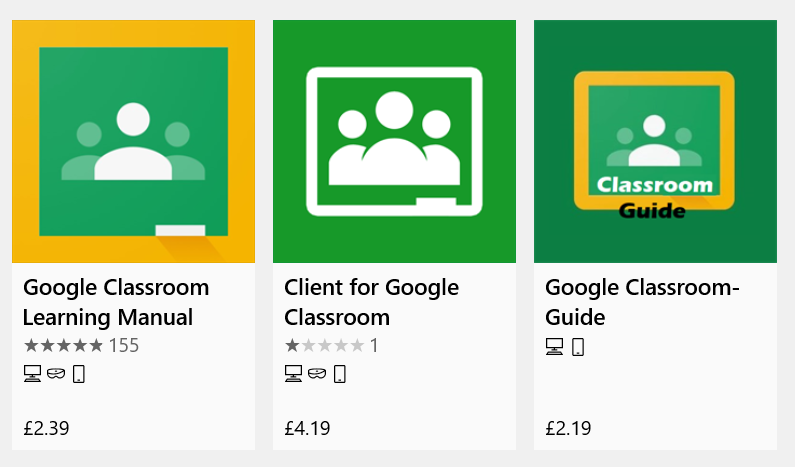 The answer? None of them. You might be thinking, “of course it’s none of them” and if you were – well done you. However, I deal with a multitude of student and parent tech skills and I can assure you that I know of people who have paid, downloaded and installed apps that they do not need. Google Classroom is free and there are tons of help guides online, also free, that you can read or watch if you do need help. Each of these apps look and feel like the official app so no wonder some users are lured into making a payment. It’s also worth noting that in Feb 2021, Google do not provide a Google Classroom app for Windows.

In short, whether your looking for Google Classroom or another tool that a school has asked you to work with, check with them before downloading anything. Schools will be able to advise, support and direct you to official links should anything be required for downloading.