Which search engine do you use? I suspect probably Google. But have you ever stopped and wondered why you use Google rather than another search engine like Yahoo or Bing? I’m pretty sure that most people won’t be able to answer this. No-one blinks at the phrase “let’s Google that” when some online information needs to be gleaned. Google, it seems, is very much hard-wired into our online searching habits. When I first started using the internet, back in the mid-1990s, the most widely used search engine was Altavista. It quickly located webpages (although there weren’t many pages back then) and it had a rather gimmicky button called ‘Random’ which took you, unsurprisingly, to a random webpage. In those early days of the internet I recall spending hours being mesmerized by the reams of information, topics, places and people I had never heard of. I’m pretty certain I can trace my love of the internet back to my student days, wiling away the hours with that random button. Following a brief flirt with Ask Jeeves I quickly became one of the millions of people who use Google every day. I’ve never looked back; until now.

I recently attended a Bring Your Own Device training day which focused on devices running Windows.  Throughout the session the presenters kept referring to Bing rather than Google when making internet searches. With hindsight, it should have been obvious that the presenters would of course use Bing. It’s a search engine owned by Microsoft, the makers of Windows; the focus of my training day. While I had heard of Bing, I’d never really given it much thought. Why would I want to switch from my trusty Google and risk missing those charming Google Doodles? It seems I’m missing a lot. 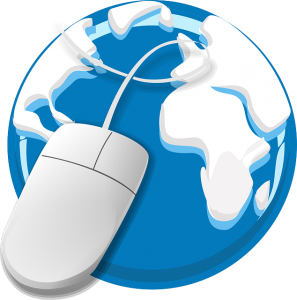 At this point I need to be very clear. I am not in any way dissatisfied with Google; it is a wonderful tool. But like a living room, every-so-often it’s worth redecorating and re-arranging the furniture. So, for the past few weeks I’ve been experimenting with Bing and seeing what it has to offer instead of Google. Initially I was quite disappointed – it seemed to work in exactly the same way as Google. However, I’m increasingly discovering nice features that make me glad I pulled down the blue, red, yellow and green colour scheme and daringly tried something new.

As for the everyday searches, Bing presents its results in a very similar way to Google. There are lots of online forums saying that Google search results are better than Bing, but I just haven’t seen this myself when I’ve run comparison searches. In fact, on a couple of occasions, Bing has given me a more useful search result than Google.  I’m sure that there’ll always be arguments for and against the search logarithms of each search engine but, for now, Bing seems to tick all of the boxes for my search needs.

I’m a strong believer that if it happens once, it’s a tradition. This time last year I set myself the first Philanthrop-e challenge, the Paperless Educator Challenge. The aim of that challenge was not to make any printouts for myself, my colleagues or my students all term. Concurrently, I would try to convince others, through demonstrations and advice, on how to reduce the amount of their printing. This term’s challenge is to go without Google and use Bing instead. I also want to actively encourage others to try and use another search engine (Bing or otherwise), rather than Google. I want to know why everyone uses Google when there are other products out there that may be better suited to their needs. The specifics of this challenge include:

I’ll be reporting back on the challenge as the term progresses. I always knew that last year’s Paperless Educator Challenge would be hard. Trying to convince colleagues to stop printing was always going to be a difficult task. While it did prove tricky I was pleased that so many people engaged and tried to make at least a small difference to their printing habits. This challenge should be easier; I suspect it won’t be. Trying to get people to use a search engine other than the one they have probably used all of their internet life is going to be tough.  It’s commonplace to hear someone say ‘Google it’, I’m not sure how successful I’ll be to get people to ‘Bing it’ instead. I’ll report back here soon…

Bing is the default search engine used on our work computers – I have tried it but do not get the results i want so always end up reverting to Google. For me, Bing is not as intuitive or user friendly – but maybe it’s just because I am so used to Google.

Thanks for your comment Emily. That’s a very interesting point about IT teams making the decision, on your behalf, about which search provider you are allowed to use. I wonder if you’ve tried asking them if you could be allowed to make the choice rather than it being forced upon you? I’m not sure why an IT team would lock down your systems so that Google is the search engine of choice. Seems rather bizarre to me!
In regards to your comment about Bing not being as intuitive or user friendly as Google, I’d love to hear more about this. To me, they both look the same and the results are presented in a virtually identical manner. There are obviously differences (otherwise, why would I switch to Bing) but any differences are very subtle and designed to encourage Google-users not to feel uncomfortable when using Bing. Any examples you could give would be appreciated.
Thanks again for commenting.

Big plus with Bing Maps for me is that they include the full ordnance survey maps as an optional filter, so if you are using maps for planning walking or cycling, or want to understand the landscape better, it is much superior!