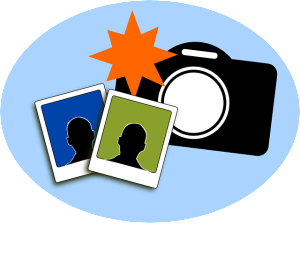 It sounds like the start of a slapstick ‘whodunnit’ but the following is a true story. Not only is it all rather amusing but it’s also a useful reminder on how the internet has become a quick reference library full of (un)reliable sources. The story goes like this… My friend and colleague Robert Hunter, the pianist of this story, was accompanying a double bass player at the Essex Young Musician of the Year Competition in July 2012. As it turns out the bassist that Robert was accompanying, Matthew Paris, won first prize. Picture the excited scene: Matthew is thrilled, Robert is delighted, they both want to capture this victorious moment in a photo. Robert quickly passes his iPhone to someone who snaps a smiling image of our winning duo. This photo, in which Matthew is proudly clutching the winners cup, is the start of a chain of events which leads to much confusion nearly two years later. 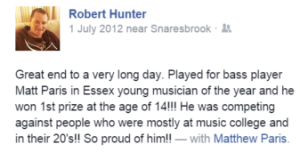 Once home, after the music competition, Robert posts the photo from his iPhone onto Facebook with the text opposite. Aside from some congratulatory comments from friends on Facebook, Robert didn’t think anymore of this photo. That is until the same picture appeared in a September 2014 printed edition of the Colchester Gazette.

For copyright reasons I can’t display a picture of the printed edition on this page but the article in the Colchester Gazette details Residents’ fury at former Tory MP’s Clacton slur. The ex-MP they make reference to is Matthew Parris who currently works for The Times, our journalist of this story. He had visited Clacton as part of the 2014 by-election and had made some rather strong comments which had offended some of the townspeople. However, the photo published alongside the article is not of Matthew Parris or even of our similarly named double bassist Matthew Paris. Instead, there is a picture of Robert Hunter. It’s clear that the photo published is the photo from 2012 in which Matthew is holding the winning cup standing alongside Robert. However, the publishers have cropped Matthew and just left Robert to appear under the tagline Town ‘going nowhere’ writes former MP. The inaccuracy of this picture was even debated on Twitter:

Who the hell is this a photo of? RT @GoodwinMJ: This is the response to Matthew Parris piece in Clacton pic.twitter.com/isv3Uf8gHw

It wasn’t until November 2014 that Robert finally heard about the article and, as you can imagine, he was rather surprised by all of this attention. Why was his face in the paper instead of the real Matthew Parris or Matthew Paris the double bassist? Why had the newspaper used a photo that had been taken 2 years previously? How did the paper get access to the photo which originated from Robert’s iPhone? Why did no-one check that the photo was incorrect? Well, we can only speculate but it’s likely that the chain of events unfolded as such: 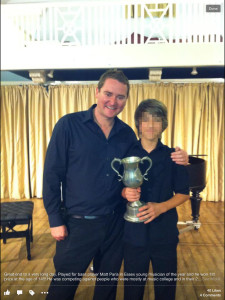 Here is the original photo (with Matthew’s face blurred). A lovely photo of two people who are clearly delighted to have won the music competition. I’m sure they never even thought that 2 years later the same photo would appear, incorrectly labelled, in a regional newspaper. This whole debacle does remind us of some simple things:

With thanks to Robert Hunter for allowing me to point and laugh at him about this whole scenario. I’m also grateful for him giving me permission to use his Facebook feed, text and photos in this blog post.

If you’ve any examples of incorrectly used photos or sources from the internet please do share them below and ‘join the discussion’.