Just as YouTube is celebrating 10 years of existence another video app, Periscope, comes along and steals the limelight. While YouTube is now firmly bedded-in as the most used video sharing platform, Periscope has the potential to offer something that YouTube doesn’t do well; live video streaming. The Periscope app, only currently available on iTunes, burst into life in March/April 2015 and despite being the new kid on the block, it is managing to be one of the most talked about apps for quite some time. Allowing users to broadcast, live, anything they wish there is now a cornucopia of live video content available. But that’s part of the problem, a quick scan of the live broadcasts reveals a rather mundane list of everyday activities: ‘walking to work’, ‘the view from my window’, ‘making an omelette’ and so on. There is still a novelty of being able to broadcast anything to anyone and broadcasts seemingly happen randomly with no way to search for relevant content. Once the dust settles I see oodles of potential for this app both in the classroom and for budding journalists everywhere.

I haven’t yet tried broadcasting (or should that be scoping) but I’ve certainly been fascinated by who and what other users are scoping. It’s incredibly addictive viewing. For the moment, as a scoping newbie, I decided to have a look at what was being publicly broadcast over two evenings and make note of my findings. It quickly became apparent that most scopes were of people eating or making food, usually in some stage of inebriation, and having a very boring conversation with someone off-screen or the handful of people who were watching. Of the others I discovered:

From the list above it seems that Periscope is currently just a random selection of ad hoc scopes filming whatever and whenever a scoper fancies. However, there were two things that jumped out at me:

So how can Periscope be useful to schools? Two uses spring to mind:

Broadcasting school events. My school has already scoped a cricket match for those parents/students who could not make it to the fixture. Aside from any school child protection issues surrounding the issue of child images, this would be a great way for those who cannot attend a: concert, play, awards evening etc to watch from another location. 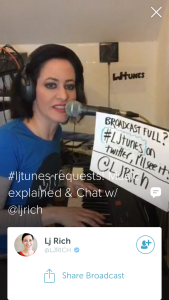 On the evening that I had a look around Periscope I came across something extraordinary that made me realise the huge potential of Periscope. I accidentally stumbled across a broadcast by LJ Rich, a rather superb musician who describes herself as a “freelance presenter and music composer/hacker”. She was happily taking requests from viewers (scopees?) and would mashup various musical numbers. This was exciting viewing as she battled to mash as much as she could as fast as the requests were being sent. It was frenetic music making made all the more exciting by the interactive and live nature of the broadcast. If there had been a ‘donate’ button I would have happily thrown some of my hard earned music teacher salary her way for a superbly enjoyable free concert. Why couldn’t other students take a leaf out of LJ Rich’s book and broadcast something that they are good at? It obviously doesn’t have to be music, it could be anything from public speaking to demonstrating chess tactics or baking cakes to handwriting skills.

Periscope is in its infancy and, at the moment, seems to contain nothing more than a rather diverse (and often mundane) selection of scopes. But the scope of periscope is vast.  Schools may find that this is another way to reach out and connect with prospective parents, the local community or even students in another country. Student’s love video and they could scope without the worry of having to spend hours editing a video, as per traditional video broadcasts, as their broadcast is live. Parents could be more involved with their son/daughter’s work via the app… the list goes on. The novelty will wear off and the random scopes will start to fade and I’m sure will be replaced by better, searchable and location specific broadcasts. There are already YouTube personalities, I suspect that there will soon be Periscope personalities. There is no reason why one of them couldn’t be a student I/you teach.

Are you using Periscope? Are you a teacher who’s used it in school? Is this another app fad or the start of a new direction for video content? Please share your thoughts below.