I’m worried. I’ve noticed a steadily increasing number of students sending me emails late into the night. Many of these are one-off late night panics: ‘Sir, I won’t be in your lesson tomorrow because..’.  However, a significant minority are also from students asking for advice, requesting a worksheet or handing in work. At this point let me be clear; I’m not worried about receiving emails, I’m concerned that students are sending them late at night. This isn’t about me complaining how my inbox is getting filled after-hours, I’m quite happy to ignore my email account after a day at school. My concern is that any student who is emailing late into the night is clearly not tucked up in bed ensuring that they are getting a decent nights sleep. Talking to colleagues in other schools this is not restricted to where I work – it seems to be a growing problem. Is it time for a student email watershed?

When I was growing up I recall my mum making it very clear that we did not receive or make telephone calls after 9pm. Should anyone have the audacity to call after this self-proclaimed watershed, and assuming that it wasn’t an emergency (it never was), then the caller was given very short shrift; regardless of their identity. The objective of this rule was clear, the period after 9pm was wind-down time so that my siblings and I could climb into our beds relaxed and fall asleep quickly. The better sleep we had, the better we functioned the next day. Simple. Back in my youth of the 1980s, however, there was only one phone in most houses and access to it could be easily controlled. Nowadays students have a multitude of devices which they can easily switch on undetected by parents or even siblings sharing the same room. Is this the cause of the rise in late night emails or is it more complicated than that?

There could be a number of reasons for the late night emails from students:

Looking at the above, perhaps it is no surprise that students are emailing late into the night. Perhaps a watershed is not such a good idea after all?

It’s not just email. Many schools now use an online facility whereby students can upload their work. This is a handy function as homework can be collected as a batch from the upload service rather than being received in a trickle via email. Here’s a screenshot (with names removed) for some work I recently set. 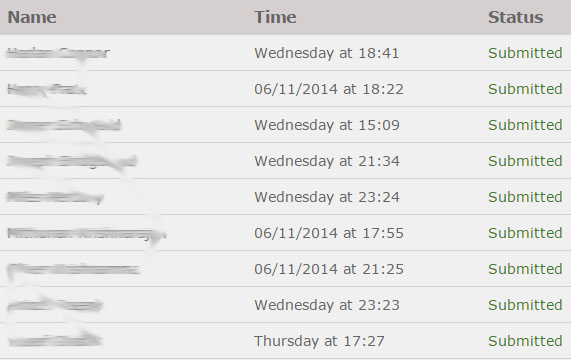 Most of the work has been handed-in between 5.30pm and 7pm. However, four students have submitted their work beyond 9pm. In one case, a student has submitted their work just before 11.30pm. This is clearly beyond bedtime for any student regardless of their year. The quality of their work often (but not always) reflects the time it was handed-in. A very late hand-in almost certainly means a poor piece of work. Therefore, whatever the reason for the late submission or email, perhaps this is a reason for a watershed? To help students achieve a decent grade rather than handing-in some poor standard homework just to tick a box or to exclaim “it’s done”.

The solution? We need to educate. Educate that sending emails, working late and uploading work into the night is unacceptable. It is imperative that students have a decent nights sleep and this is more important than handing in a rushed, poor or incomplete piece of homework. Any teacher would rather have a day-late, but excellent piece of work, than a late night and slapdash submission. Several people have suggested to me that teachers should delete any emails that they receive after 9pm to avoid this late night emailing. I don’t subscribe to this point of view. Email is a wonderful tool allowing people to communicate over time zones and respond when it is convenient. Businesses do not delete emails after 9pm so what are we teaching students if we ban them from email after 9pm? Parents, though, have an essential role to play. As I mentioned above, switching off the wi-fi isn’t the solution, but parents should be ensuring that their son/daughter is not working late into the night (regardless whether this is on a device or completing ‘traditional’ work such as an exercise book). A bedtime is usually a very clearly defined time in most homes so why not have a ‘no homework after’ rule as well? Of course, flexibility is the key and this time may fluctuate to account for the varying activities a student is involved with.

Teachers also need to be aware of the pressures on students and that they are often being pulled in so many different directions by their: team coach, other subject teachers, parents, friends and other clubs/societies they are involved in. Once upon a time a teacher would only mark work when all the exercise books had been collected-in. As schools move to online homework or exercises, perhaps teachers should be more flexible and mark work in a more flexible manner as well?

So, do we need a watershed? Perhaps we do but only for guidance rather than a bullish “no emails after Xpm”. So many other factors need to be considered. A one-size fits all is clearly not the answer.

Your Thoughts If you’ve any comments on the above, suggestions or experiences of an email watershed I’d love to hear from you. Please do share your thoughts with others and ‘join the discussion’ below.

I have 5 email accounts.
“live.co.uk” is for teaching matters.
After 7 pm, it returns a “not available” message. I just don’t look at it until the next morning.
Also, using the “delayed sending”
in Outlook allows me to composer an email in the evening, if a thought strikes, but not have it sent until next morning, thus respecting others right to a peaceful evening.

Thanks for this comment David. I like the idea of an automated “not available” message after 7pm every evening. I often switch on the out-of-office function should I be away from my desk for a prolonged period but I’ve never considered using it for a specific time period each day like yourself. I’m assuming that this is an automated setting rather than a daily, and manual, process? I would also assume that you’ve also got this set-up for weekends as well?
Of course, I’m more concerned about the students sending emails late into the evening rather than the clogging-up of my inbox. No student (or parent) can expect a response out of office hours. I wonder how we can stop (or reduce) those emails sent by students late at night when they would be better tucked up in bed?